Washington County analyzes their AC units to save energy.

Washington County in Hillsboro, Oregon, one of the three counties that make up the Portland metro area has with the help of Emerging Energy Solutions inspected fourteen roof top units on one of their building. The purpose of the analysis of these RTUs (Roof Top Units) was to establish a base line for future comparison, check efficiency, and make recommendations on maintenance, service, and optimization.

Washington County in Hillsboro, Oregon, one of the three counties that make up the Portland metro area has with the help of Emerging Energy Solutions inspected fourteen roof top units on one of their building. The purpose of the analysis of these RTUs (Roof Top Units) was to establish a base line for future comparison, check efficiency, and make recommendations on maintenance, service, and optimization. The ClimaCheck Performance Analyser was used to document overall performance and behavior of the systems. Low cost adjustments will improve the EER/COP with 10-25% on many of the units and decrease the wear.

All fourteen units are manufactured by AAON. An external visual inspection show that all were in good shape. Only one compressor out of 27 has been replaced in 12 years. The facilities department who maintains them and any of the outside contractors that have done service on them have kept the system in operation without high failure rates.

The ClimaCheck onsite (a field performance analyzer) is a portable data acquisition system that uses a multitude of temperature sensors, pressure transducers, and electrical analyzing equipment, all readings and measurements are then analyzed by the ClimaCheck software. The software uses thermodynamic equations and the principle of conservation of energy to calculate the same information which was before has required a research and development lab. All conclusions
were made by evaluation of this data using nominal data supplied by the manufacturer. Systems for permanently installed monitoring are also available.

The purpose of the tests was to establish the status of fourteen roof top units where all except one had two refrigerant circuits. The units were 12 years old and all from the same manufacturer and has been serviced on a regular interval by trained technicians but without access to state of the art analyzing systems. Since no information on nominal data was available on site, this was requested from the manufacturer after the measurements for comparison.

The data from the manufacturer was checked against the ClimaCheck data making it clear that most of the systems were not operating within specification. The technicians servicing these units have not had access to the manufacture’s operational specifications or state of the art tools to analyze the systems performance which explains why many systems are showing large deviation in performance compared to optimal operation. Many of the system can easily be improved to perform as intended whereas some might need some more attention.

The graph to the right shows variations of EER between 14 and 21 (COP 4.1- 6.2) with an average of around 19. Some of the variation is caused by variation in 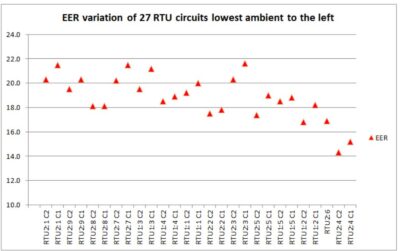 ambient temperature over the test period, which is normal in field tests. But there is a clear opportunity to improve EER/COP with 10-25% and reliability on many of the units. This can be achieved at low cost by adjusting them to operate according to the manufacturer specifications.

The cost of adjusting the units with the help of the ClimaCheck Performance Analyser to specification versus just “checking” them in a traditional fashion with traditional service tools would
be low. There is a significant energy savings potential of at least 10% just by ensuring the refrigerant charge and super heat settings are within manufacturer specifications. Additional savings of the same order of magnitude would be achieved by optimization of air flows and identifying the cause of the large spread in heat exchangers that is recorded. Air flows, fouling and poor distributions of refrigerant between evaporator circuits are common cause of poor heat exchanger
performance. Without manufacturer design data this investigation would require further test to establish base lines and exact saving potential. Four  compressors showed significant reduction of efficiency justifying an evaluation if they should be replaced before they fail or if these systems should be considered near the end of their economic life and in line for replacement when the compressor fails.

Conducting tests during optimization and measuring performance after measures will automatically document the improvement achieved.

As the survey clearly documented that the status can be significantly improved actions are planned at start-up of next air conditioning season.

This test was led by Joel Klobas, Technical Director at Emerging Energy Solutions, US distributor of products and services from ClimaCheck Sweden AB.

For further information on the survey or the ClimaCheck Performance analyser contact Emerging Energy Solutions, Sean McCaffery,  or ClimaCheck Sweden 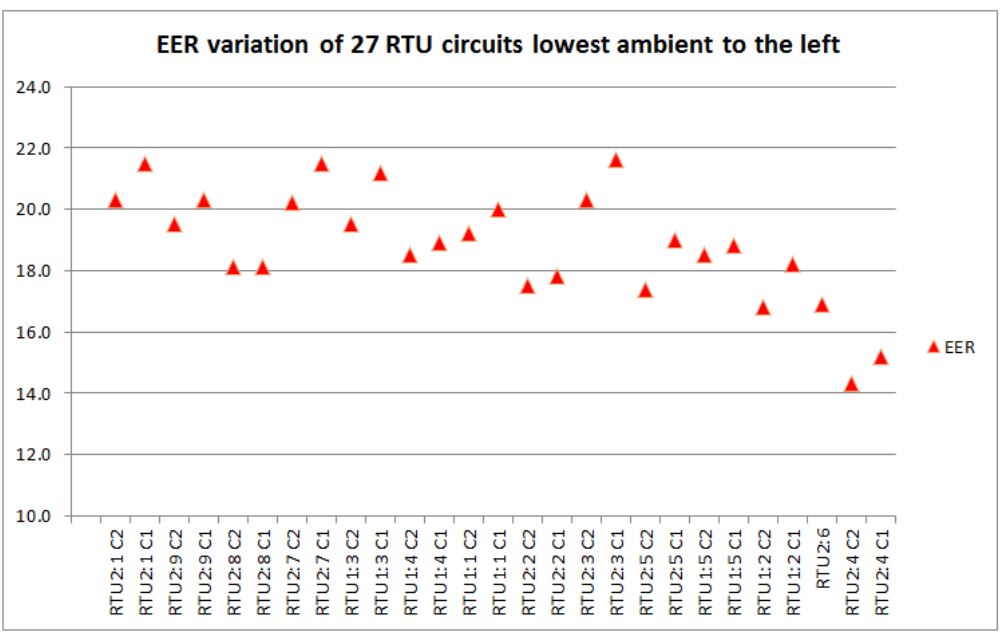